So I’ve been back in the ‘Kong two weeks and nothing too exciting to write about has happened yet because of jet lag, work etc.  So I thought, why not do a travel piece on the old stomping ground of Cov?  There’s lots to do there to keep you amused for  few days, and I think you might be pleasantly surprised…!  So here’s some places I swung by during my trip back home. 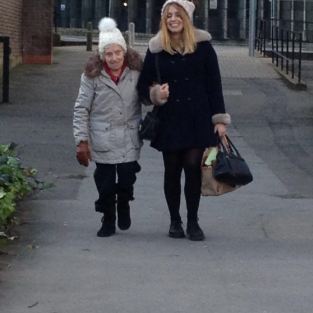 Me and Nan stopping round Cov

This post was originally also going to include places to eat and drink but the post was already really long….  Maybe that will be next week’s post, ha.

Things to see & do

Coventry Cathedral, Priory Street:  I have such fond memories of this place, we did an amazing school trip here learning about the history of the city, we watched a famous French tightrope walker walk across the ruins on Millennium New Year and my mum organised a Knitathon here for comic relief trying to break the World Record for the most amount of people knitting together in a room!

The ‘new’ Cathedral (opened in 1962) sits next to the original which remains in ruins after being bombed during World War II.  Go in and take a look around, you really will be amazed by the art and architecture of this glorious building.   Designed by Sir Basil Spence, the building compliments one of the city’s iconic themes, that of peace and reconciliation. Take some time to drop by the old ruins and climb up one of the city’s famous Three Spires and take in the glorious view.  Admission is free for those wishing to pray, otherwise a standard adult tickets costs £6.

NOTE:  Go via The Rising Cafe for tea and cake afterwards – I cannot rate this place enough, reasonably priced warming food for them UK bad weather days (of which there are lots!).

Herbert Art Museum, Jordan Well:  To be honest, I didn’t really know this place all that well growing up.  It had always been around, I think, but I only really started dropping by in the last few years.  When I was back last, we took a look at the history of Coventry exhibit – highlights included spotting my old school uniform in the 90s area, and dressing up in chainmail!  We were also fortunate to see The Wildlife Photographer of the Year exhibition whilst we were there which was amazing.  The young photographer sections were particularly compelling – it’s on until the start of April so there’s still time to see it!  Admission is free! 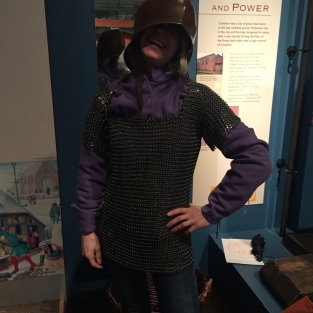 Theatre Absolute AKA Shop Front Theatre:  I had no idea what my mum and sister were talking about they described this to me, what I had in my head was people performing in a shop window and people standing outside to watch.  But no, this small theatre company performs in an old shop in coventry Arcade which used to be a fish and chip shop restaurant!

I went to see TRAUM, a story about migration told through the medium of breakdance.  to be honest I wasn’t sure what to expect, but I was completely enthralled and didn’t expect the performance to stir quite so much emotion in me.  We were also lucky enough to attend a Q&A at the end with the script writer and the two performers, both migrants themselves.  What’s more tickets were only £8.

Mum took me here on a
surprise visit for our morning out together – I was expecting to go shopping but this was much better!  A very small indie museum, run entirely by volunteers, this is the place to go if you are a music fan.  The museum’s key theme is the multiculturalism within the local music scene – 2-tone, ska, bhangra, rock, electronica and pop it’s all here.  The main focus is the 2-tone and ska music, which isn’t surprising considering the more famous bands to have been born out of the city like The Specials and The Selecter.  Be sure to visit the 2-tone village after, there’s a cafe that does a mean goat curry (so I’m told), a vinyl and memorabilia shop.  Admission is £3.

Fargo Village, Far Gosford Street:  I’ve only dropped by here a couple of times, but when i have it has been marvellous (and a little dent in the wallet because of all the beautiful vintage things i end up buying!).  This is creative space with cafes, studios and pop up shops with food and drink events happening on the weekend.  When I last went, a lot of it was closed, being a rainy Monday and all, but my cooler and trendier little sister says this place has lots of fun events happening.  So visit their website before heading here.

Coombe Abbey:  Head here for the great outdoors – fabulous walks, local nature trails and the reason I was there, for a bit of afternoon tea in the fancy old hotel!

Nan and Nicole enjoying their treats!

There’s lots of other places to visit I haven’t mentioned like the Coventry Transport Museum, The Belgrade and Criterion Theatres, the Police Museum which also deserve a notable mention.  Maybe these are the places i’ll head to next time I’m back in Blighty.